Linking Brisbane Planetarium to the World

The evening of Tuesday, 14 July 2015, was a first for the Sir Thomas Brisbane Planetarium and a handful of others with a live linkup orchestrated by the American Museum of Natural History in New York for coverage and interaction during the flyby of Pluto by NASA’s New Horizons spacecraft. (The image below shows preparations in the Brisbane Planetarium for the linkup.)

A full rehearsal involved participants on Monday night to iron out any issues and we had to take two feeds – one showing crosses to each location using Google Hangouts and the other using OpenSpace with full simulation second-by-second controlled from the US. Other facilities with view/listen only and submitting questions by Twitter included:

The image above was taken as Brisbane prepared for one of my crosses to APL and mission team members for a Q&A. My technical staff member Greg Slaats at left was key to the success of Brisbane being one of the smoothest in the linkups during the two hours. 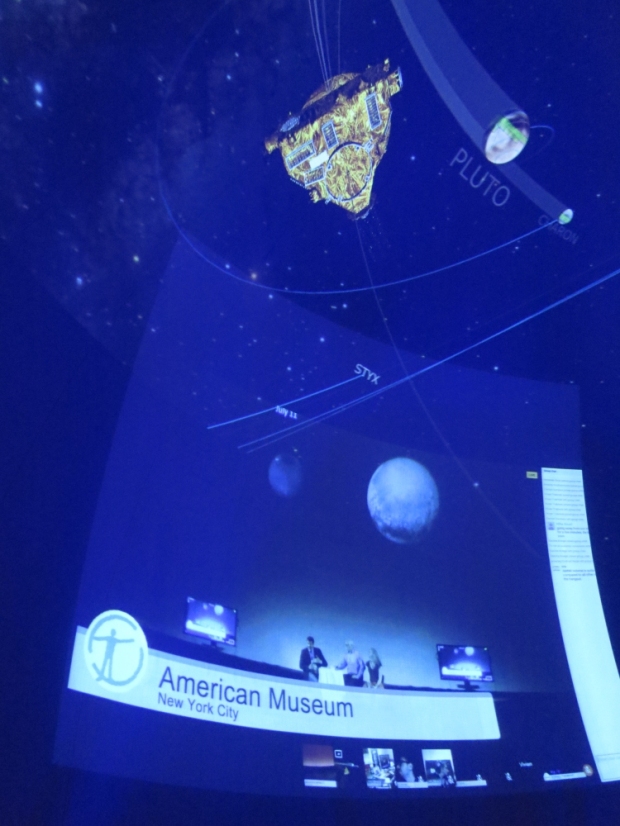 In Brisbane, we did the presentation in a uni-directional format, which meant we could not use all of our seating. The crosses to other places was projected down above the springline, while the simulation showing exactly what was happening and instruments in use utilised one of our fulldome zenith projectors with the mask removed.

It was a great evening with staff coming in their own time, including Jean Falconer who is still working at the Brisbane Planetarium after 27 years and who was born in January 1930, the same month that Clyde Tombaugh took his Pluto discovery images. (Images taken in the dome by Duncan Waldron.)

During the evening, we also asked some quiz questions relating to Pluto with prizes of miniature New Horizons spacecraft we had 3D printed for correct answers.

Recorded coverage of the event can be seen at https://youtu.be/oEFz5JxLd8w

This entry was posted in Uncategorized and tagged Brisbane, Pluto. Bookmark the permalink.

2 Responses to Linking Brisbane Planetarium to the World